So, the plan ever since we found out that I was stage 3 (not stage 4, which would have taken away surgery, or stage 2, which might have taken away chemo) was for us to do four steps to get rid of the cancer and stop it from coming back:  1) surgery; 2) chemo; 3) radiation; and 4) Tamoxifen/Arimidex, which are two types of endocrine therapy —  drugs that prevent the cancer cells from binding to the estrogen in my body. I’m on Tamoxifen now because I’m still technically pre-menopausal despite chemo effectively throwing me into menopause; I’ll switch to Arimidex, the post-menopause version, after I have my ovaries removed next month, because it’s more effective for my type of cancer.

But right around the time I finished radiation I got a voice mail from my oncologist which I didn’t fully understand, something about a clinical trial and Ibrance and they were just opening a new protocol and she thought of me immediately.  I made an appointment to go in and see her, and it turns out that Eli Lilly had been working on a CDK 4/6 inhibitor to compete with Pfizer’s Ibrance (they run ads for Ibrance on TV, featuring “Julie who is living with metastatic breast cancer”).  US Oncology was participating in a brand new clinical trial for Eli Lilly’s similar drug, abemaciclib, but you had to have a certain type of cancer and be in a very particular place with treatment in terms of radiation and the endocrine therapy.  They wanted to compare recurrence rates between people who only took the endocrine therapy with people who did endocrine therapy and abemaciclib.

Not really my type of music, but I admire their style.

I just so happened to be in exactly the right place in my treatment, and hearing how excited my doctor was about the drug, (and after being assured I could drop out of the study if I received the trial drug but found out the side effects were too severe) I signed up right away.  I was the first patient signed up for the trial at my oncologist’s practice, and we later learned I was the first participant in the entire U.S.!  It’s not a blind study, but I had to wait over the Labor Day weekend before I could be randomized into one of the two study arms.  Luckily for me, I was chosen to take abemaciclib!  We successfully added a step 5 to our plan.  Take that, cancer!

So, how does it work?  Beats me.  Okay, so from what I understand, a CDK is a “cyclin-dependent kinase.”  CDK 4 and 6 are particulars types of CDKs.  A CDK tells your cells to keep dividing – usually in adults, most of your cells don’t need to reproduce so their reproduction is kind of “turned off.”  One of the things that happens in cancer is that the cancer cell’s reproduction switch gets stuck in the “on” position, and in breast cancer it’s CDK 4 and 6 that they think cause the switch to get stuck.  So by inhibiting these CDKs, any breast cancer cells hanging around won’t be signaled to reproduce and they’ll die off.    Now, interestingly, you do need your bone marrow to keep reproducing new blood cells and your digestive tract’s cells are constantly reproducing.  So one of the tricks is to make sure those cells don’t get turned off when they turn off the cancer cells.  (I have no idea how scientifically valid that explanation is, but that’s my understanding of how it works.) 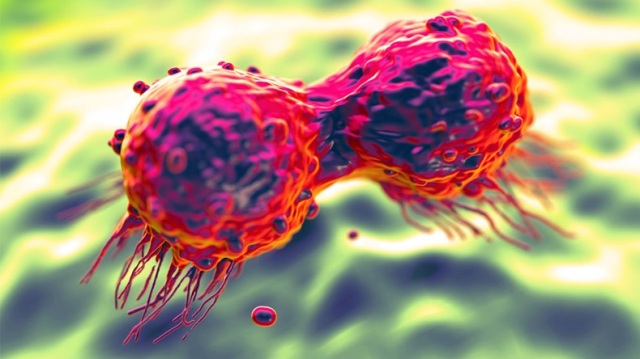 This is a breast cancer cell dividing.  Looks pretty, is actually ugly.

When I started on abemaciclib it wasn’t yet FDA approved.  Last week it was approved for certain stage 4 patients and given a name – Verzenio, which I think sounds like something I might order at a tapas place or maybe a brand of wine.  They also gave it a price tag of over $10,000 a month (which is in line with both Ibrance and the other drug in this class, Kisqali, but is still pretty ridiculous, right?).  Luckily since I’m in a clinical trial I get it for free.

They told me I might have some fatigue and diarrhea from the medicine, but so far I haven’t had much of either.  Of course, there’s no way to test what it’s doing, but I’ll take it for 2 years and then they’ll compare recurrence rates at 5 and 10 years out, so we’ll see.  I’m just happy to have one more tool to use to fight the beast!