I put last in quotations because I don’t want to jinx it — at this point, who knows?  But 360 days after my first cancer related surgery, the sentinel lymph node biopsy, it was time for my last one:  reconstruction of my breasts.  From most people’s perspective, this should have been a fun surgery.  I don’t want to even tell you how many comments I got about a “free boob job” or to “make sure I picked good ones.” (Let’s put aside that surgery is never “fun.”)

Luckily, I also had friends who had been through this before and let me know that it doesn’t work like that:  you most likely don’t get porn star boobs after cancer.  Reconstructive surgery is totally different than augmentation — with augmentation, you have something there, you’re just adding to it.  In my case, I don’t even have nipples, let alone breast tissue.  You might also recall that there was a lot of worry about my skin and how thin it was – it could only stretch so far.  We did make the decision at the beginning of the process to put the implants over the pectoral muscle – my plastic surgeon, Dr K, said most of his patients who are active, like me, are unhappy with the movement of the implants when they go under the muscle.  He said they would shift around every time I lifted weights, and I definitely didn’t want that.

So there were still a bunch of options though – round versus teardrop versus saline versus silicone versus smooth versus textured, and that’s not even mentioning size.  But again, a lot of this was out of my hands because we had to deal with the skin I had and how much it was able to stretch, as well as my somewhat unlucky combination of a wide ribcage and a short torso. My plastic surgeon, Dr. K, told me he was going to take in two different implants and see which one worked the best.  A Christmas surprise! 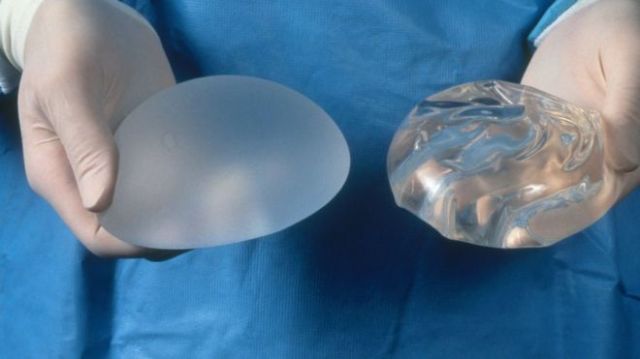 Textured round on the left, smooth on the right.

Well, he ended up taking and trying FOUR different implants before settling on what are called “gummy bear” implants:  teardrop shaped, textured, silicone.  He said the round ones he tried were up to my collarbone, so while they would have given me better projection (read: a bigger rack), they would have made me look heavy and dumpy and the skin distortion would have been visible under a v-necked shirt.  I ended up with 690cc in each implant, and they come with a ten year warranty which for some reason makes me laugh.

These are the kind I ended up with.  I don’t know if life is more beautiful, but hopefully I am?

The surgery itself wasn’t terrible, but it was still surgery.  A week out I’m still pretty sore and nowhere near ready to start running again (Dr K said a week to a week and a half, so maybe I’m just a wimp). I have been able to walk a bit and I’m almost off pain pills, but not entirely.  The incisions are tender and the implants are kind of achy.  I also had my port out at the same time, which is another incision but not really bothering me. I do have a little extra soreness on my left (cancer) side, where Dr. K said he broke up some scar tissue probably from the lymph node dissection.

So how do they look?  Well, I don’t know.  I hated them at first, and now I think they look okay.  You really aren’t supposed to judge for at least three months, so I’ll see what Dr. K has to say at my follow up.  I’m disinclined to make any changes for at least a year anyway — I want to lose some more weight, they need to settle and the swelling needs to go down, and I need to just get used to them.  It’s pretty common for people to be unhappy with their appearance immediately after cosmetic or reconstructive surgery — after my breast reduction and lift, I actually cried the first time I looked in the mirror.  It’s just weird to see yourself looking totally different than you are used to.  This time, I guess I kind of understand “you get what you get.”  I still have 100% confidence in Dr. K and that however these end up will be the best he could do in the circumstances.

And with that, I’m done with the planned “year o’ cancer.”  Although, it turns out that it’s not that easy to jump back into your previous life.  More on that in my next post!