(Note: all running times mentioned herein are objectively slow. I am aware of that. So please don’t comment just to point out that I am a very slow runner. Tortoise/hare and all such as. Also, this post is incredibly long and therefore possibly boring.)

I’ve mentioned before that I’ve been running alone for most of this season. I purposefully slowed down in order to increase the chance that I’d be able to finish the distance Goofy requires, and my running friends are all faster than me to start with. It doesn’t bother me, usually. I mean it’s nobody’s fault that I’m slower, and it’s nice sometimes to be alone and just let your mind wander. But at the same time, by this time of the season I’m starting to get tired of training anyway. It’s the holidays, and I want to relax and go to Christmas parties, not get up early to run crazy distances and keep bugging people to donate money to my fundraising. And so lately I’ve been thinking, what difference does it make if I go to training if I just run by myself anyway?

Earlier this fall, a few of us thought we’d go to San Antonio and run the Rock n Roll 10k and half-marathon. We had 7 and 13 on our schedule this weekend anyway, so we might as well get some medals for them, right? Well, schedules got tight and it ended up being that only Courtney and I would be able to go, and she could only stay for the 10k and not the half. I talked Tony into driving with me (um, which means he drove the whole way both directions) and we got there Friday night. Courtney and Drew’s plane was severely delayed and for a bit it looked like they wouldn’t make it at all. But they did, and we went to Mi Tierra for margaritas and mariachi and had a great night.

The next morning the guys walked us to the start line for the 10k and then went to Starbucks until time to meet us at the finish. Courtney turned and asked me about my planned intervals for the run. I told her, but shrugged and said, “it doesn’t really matter though, I’ll lose you within a quarter mile or so anyway.” She immediately said, “I don’t mind.” Now Courtney normally runs a lot faster than I do – about 3.5 to 4 minutes per mile faster. So slowing down with me would feel really slow for her. But she did, and she stayed with me the whole way. And maybe because I was conscious of the favor she was doing me, or maybe because I was embarrassed by how slow I really am, or maybe just because someone besides me was there paying attention to what I was doing and I didn’t let myself off the hook – we ended up going about 1.5 minutes per mile faster than I usually do. I love the picture Tony got below of us crossing the finish line (actual chip time was 1:22). I forgot how much more quickly the miles fly by when you have someone to talk to about the Gu Girl and why Courtney really wanted to punch some random lady and what the heck is that person wearing? We celebrated our victory with a pitcher of sangria before Courtney and Drew headed back to Dallas and I took a much-needed nap.

So the next day, I was at the half by myself. And for whatever reason I was in a corral with the 2:45 pacers for the half marathon and decided to try to keep up with them for a while. That pace was a little faster than we had run the day before, but the course limits were generous and I figured even if I blew up, I’d still finish.

I kept up for five miles. I knew I’d give up a ton of time on the hills between miles 5 and 7 (they were no joke!) and I did, but I was able to speed back up some after that and by mile 11 I was pretty sure I’d get a PR (personal record). My previous PR was the Seattle half, where I ran 3:10. I even thought that maybe, just maybe, I’d be able to break the three-hour mark, which for me would be big and something I’d had as a “maybe someday” goal. I was really feeling it in my legs and especially my knees by now, and was a little teary as I passed the mile 13 marker. (Yeah, distance running sometimes makes people super emotional.) And then, just as I came down the stretch, I hear, “Liz! Liz! Over here!” and there’s Tony, smiling and cheering and taking my picture and the tears spilled over as I crossed the finish line and got my medals. Official time – 2:54, a 16 minute PR. 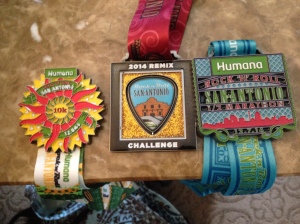 But the great thing about the races this weekend wasn’t that I ran them faster than I have before. It was that they reminded me why I do this in the first place. Yes, I do it for Angi and to raise money for the Leukemia & Lymphoma Society in her memory, but if it were just about the money I could just make a donation every year.

I stay with Team in Training because at its best, running reminds you of how great it feels to be alive. And I do it because my friend Angi taught me a lot about what it means to be a friend, and what it means to love and be loved in return. And at a time in the season when I haven’t been appreciating those things and the power of a team like I should, my friend Courtney and my love Tony were there to remind me.